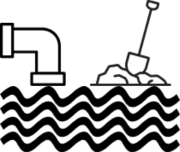 We have a septic government that needs flushing, but I digress.

Septic tanks are not the problem. It's the soak-aways.  I note that in Australia, even homes on waterborne (municipal) sewerage, have septic tanks in place. It is a brilliant idea, as the sewer works will not get any of the abuse. And no sand - which is a killer. If you abuse, it's for your account. So, the people know what not to do, and if not, it costs you money.

Many years ago, one of our clients, Gavin - who lived in the un-sewered area of Westville, asked us to look at his borehole, as his pump wasn't working.  We lifted the pump, which was about 110 meters deep, and found the stainless steel casing had been eaten through.  We suggested the installation was a write-off, since the water from the area's septic tanks, had created an underground chemical cocktail that was dangerous, even lethal. Gavin agreed he did not want that same water anyplace near his where his grand children played.

The real  problem, is the french drain (aka soakaway, leachfield etc). A hundred years ago, one dwelling had no sight of the next, and therefore wastewater had time to naturally biodegrade.  The same property now has 125 houses on it, each producing up to 1500 litres of wastewater every day. These french drain systems are often out of the way (and often on the neighbour's boundary). The guy at the lowest point, actually gets paid to live there.

I meant to ask Roley to look outside and see what else had changed in 100 years.